It's Time to Celebrate! 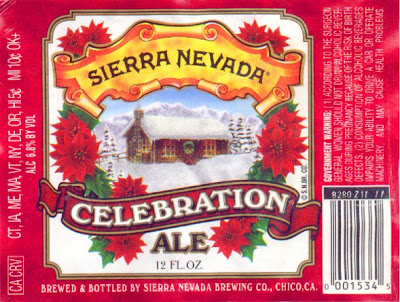 Well, Thanksgiving is over, the tree is up and decorated, and December is already here. Christmas and New Years are right around the corner, and there are plenty of new (and some not so new) beers being released.

One of the not so new beers is Sierra Nevada's Celebration Ale. Released each year about this time, this brew is an American classic. For over two decades, craft beer lovers have been able to look forward to the release of this ale to signal the start of the holiday season.

I snagged a six pack from the Fred Meyer in Soldotna over the weekend and sampled a couple. Poured out into a large snifter, the beer is a dark copper color, with excellent clarity. The head is massive and rocky, with a wonderful amount of thick lacing along the side of the glass. Nose is charged with citric and resiny hop notes, with a little roasted malt in the background. A nice full body of the palate, with plenty of crispness. The sharp hop bitterness cuts through the maltiness, for an excellent balance. The finish hints at the significant alcohol (6.8% ABV), warming and leaving you looking for more. Celebration Ale remains the classic American Winter Warmer; if you haven't tried this beer yet, you are really missing out!

On Black Friday, my lovely wife and I did a little shopping, just like everyone else in the known world, judging by the crowds. As part of driving all over the Kenai-Soldotna area, I made it a point to stop in at the local breweries.

Kassik's Kenai Brew Stop released their Double Wood Imperial IPA back on 11/17, but this was my first chance to swing by and sample it. The beer pours a dark gold, with a rocky, cream-colored head, long-lasting and producing extensive lacing. The aroma is of hops, hops, and more hops, as you'd expect in a 95 IBU beer. On the tongue, there is a long, deep hop flavor, extraordinarily well-balanced for the degree of bitterness. I've had beers that were actually hopped much less than this one which had a much harsher hop taste. When Frank selected the exact blend of hop varieties to use on this beer, I think he may have achieved perfection, or something damn near. The finish is long and more-ish, not withstanding the 9+% ABV. Wow! This is an amazing beer, and if you are a fan of IPAs, seek it out quickly before it's all gone. I hope this will become a semi-regular part of the Brew Stop line-up.

On the near horizon is a Smoked Russian Imperial Stout; look for it to be released on 12/12.

At Kenai River Brewing, I'm saddened to report that the limited amount of Wee Heavy Scotch Ale that was on tap has been exhausted. However, Doug has replaced it with his aptly named Breakfast Beer, an oatmeal-milk stout. (Just don't let him talk you into the strip of bacon swizzle stick...) The beer is a hybrid of two classic stout styles; oatmeal stouts, which have oats added to the mash to increase the body and mouthfeel of the brew and sweet or "milk" stouts, which have unfermentable lactose AKA milk sugar added. Putting the two ideas together, Kenai River has produced a stout that to look at is absolutely opaque, with a tan head. The aroma speaks strongly of roasted grains, as you would expect from a stout, while on the tongue the beer has tremendous body. There is a decided silkiness on the palate from the oats, combined with a sweetness from the lactose and roasted flavors from the grains. Hops are there strictly for balance, with no noticeable presence. An unusual but excellent beer, and one which I think might prove especially excellent to cook with, given its sweetness and low bitterness. I could see this beer making a fabulous steak and ale pie, or being used to de-glaze a pan to make a lovely sauce.

Finally, at St. Elias Brewing Company, there was nothing new on tap last Friday, but Zach Henry expects to have his new Imperial Pilsner on by this coming weekend. And don't forget about Thirsty Thursday at St. Elias, with live music by Mike Morgan from 7 to 9 PM, on 12/3.

I'll be heading up to Anchor-Town this Friday, so hopefully I'll have some more interesting brews to write about upon my return. Also, be sure to check out my monthly column in this week's Redoubt Reporter.