Happens every time: I no sooner get a blog out than another piece of news comes in that really should be included. Plus, I somehow totally forgot to mention the winners of the NorthWest Brewing News' Reader Choice Poll [Insert forehead slap here].

First off, Baranof Island Brewing in Sitka just released a new beer. Also, when I was in Anchorage last week, I saw six-packs of their Silver Bay IPA in cans at La Bodega.  Here's how they describe their new brew:

Baranof Island Brewing is proud to announce the return of MC's Black IPA. This dark, hoppy and slightly sweet ale is 6.65%ABV with 60 IBU's. This is a seasonal winter ale that is a holiday favorite in Sitka.

This dark ale has a coffee-chocolate aroma. “It is the perfect balance of dark malt along with Nugget and Zeus hops, to give it a bitter mouth feel with a dry clean finish that makes you want to take another sip” says Head Brewer Mike DesRosiers. This ale is only available for a limited time in Sitka, so swing by Alaska's favorite brewery and grab yourself a glass.


Second, here are the winners of this year's Reader Choice Poll. Congratulations to you all.

We now return you to your previously scheduled blog hiatus...

Until next Time, Cheers!

News, Cellar Reviews, and a Hiatus

Hello again from Alaska, the land that winter forgot. We finally got a couple of inches of snow on the ground, but here it is almost mid-December and we are still having days with temperatures above freezing. Not that I'm complaining about not having to blow snow every other day or keep the wood stove blazing; it just seems a bit strange. It's like we're all waiting for the other shoe to drop, when the weather gets truly terrible... 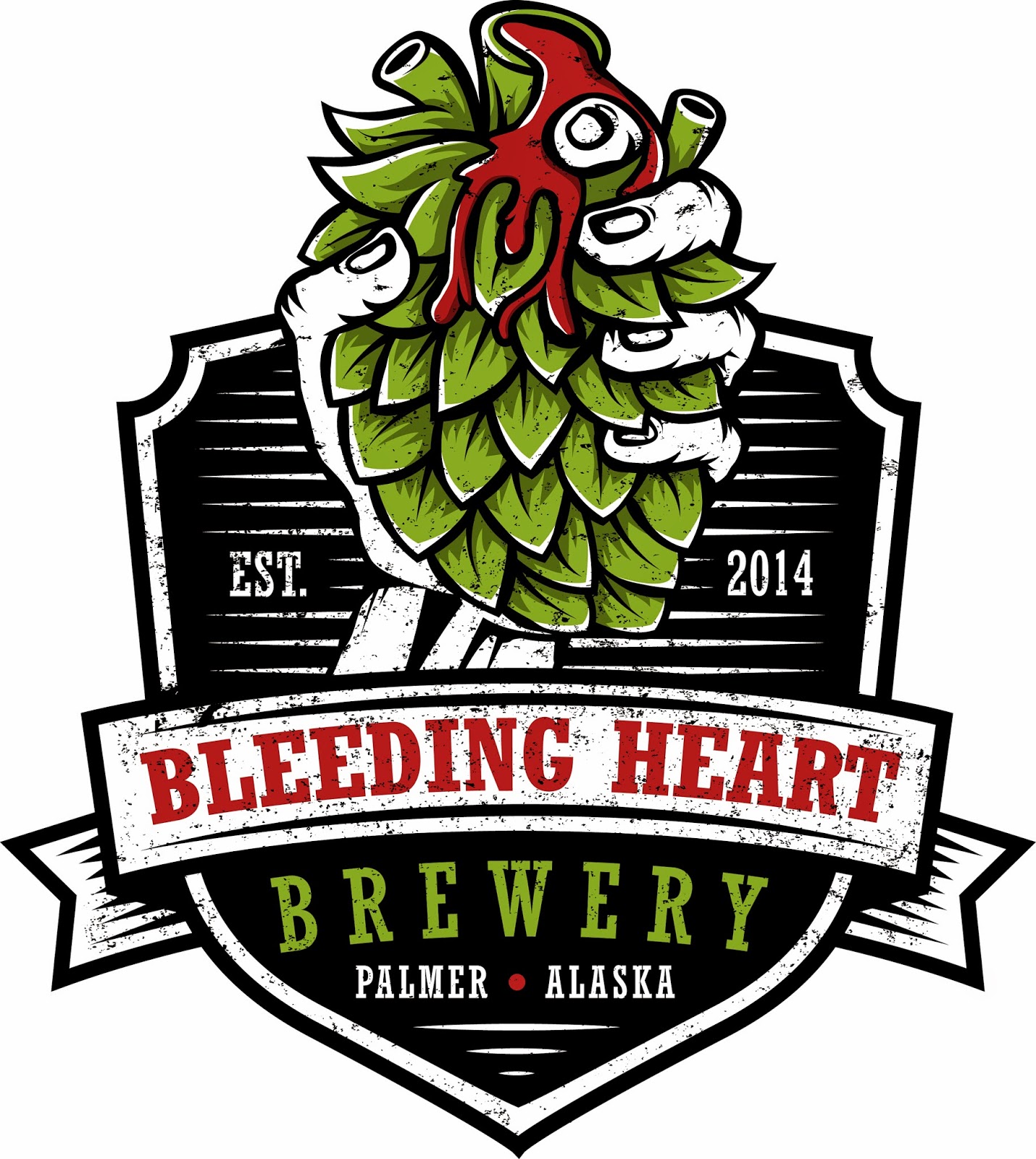 Anyway, while we wait, there's plenty of doings in the local beer world. Under "Coming Attractions," Bleeding Heart Brewery in Palmer had a very successful Kickstarter campaign, closing on November 22. 155 backers pledged $21,701, almost triple their goal of $7,500. Look for them to be open by June of 2015.

Meanwhile, Resolution Brewing in the Mountain View neighborhood of Anchorage just took deliver of the shipping container full of all their brewing equipment, grain and growlers on Monday, December 8th. They will be working to get the equipment installed and complete final inspections ASAP. No opening date set yet, but I'd expect it to be sometime in the next several weeks. Meanwhile, Resolution's cool stainless keg-style growlers will be going on sale for Christmas.
While the new kids on the block work to open for business, one of the established breweries is pushing hard to get its new facilities finished. On Friday, December 5th, I was able to stop by Anchorage Brewing Company's new facility, still under construction. As you can see from the photos below, when it is finished, it's going to be a magnificent structure. The photos are courtesy of Elaine Howell.


Once completed, patrons will be able to sit in the Tasting Room and gaze at the ten huge wooden tanks in two columns of five, flanking the brewhouse, which will be positioned against the back wall, the top portion of which is reclaimed wood. The room on the left behind the brewhouse will house grain storage and bottle conditioning, while the one on the right has enough space for about 800 barrels. In addition, Gabe has announced that his sister Heather has returned to Alaska and will be running the Tasting Room.


Gabe reports that his brewhouse is due to arrive in Anchorage on December 22, and he hopes to have it installed and tested by late January. If all goes well, we might see an opening not too long after that, so keep your ear to the ground.

At Silver Gulch Brewing and Bottling in Fox, there are a couple of holiday fruit ales on tap.  Here's how they describe them:

Two different Holiday Ales using our German Pilsner imbued with Belgian Abbey Yeast and finished with Apricot and Blueberry Purees.The light golden hue comes from the use of Plzen malt and offers an effervescence that starts and finishes crisp and clean. Both are distinctly fruity and spicy. The yeast lends a note of clove and in combination with the malt, hints of plum and apricot on the first and slightly citrus and blueberry on the second. The malt itself provides a warm honey quality up front, a round fullness in the middle, and the hops, together with our pure brewing water, lend a clean, dry finish. 5.6% ABV 30 IBU's

Denali Brewing has released Milepost #3 in its Flag Stop series, a Belgian Dark Ale aged in J Lohr cabernet barrels and bottle conditioned with champagne yeast. It's available only at Denali Brewpub in Talkeetna.


At Arkose Brewery in Palmer, this Friday marks the released on its Olde Colony Winter Ale, as part of the Colony Christmas Celebration. 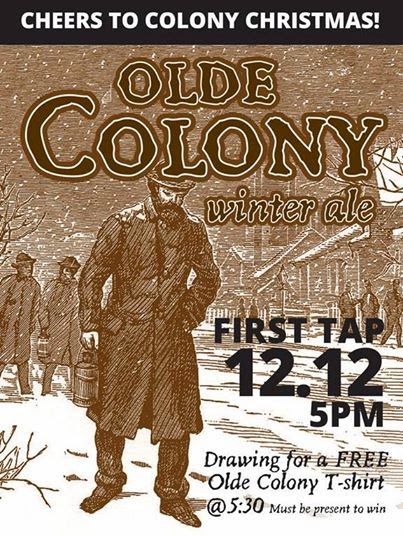 
At Midnight Sun Brewing Company in Anchorage, there is a new brew on tap. To celebrate the 81st Anniversary of the end of Prohibition, it has released Un-Prohibited Pilsner, 5.9% ABV and 30 IBUs. It is made using only Mosaic hops. It will only be on draft, so look for it at The Loft and at other fine beer bars around the state. Also available is Francoisk, a 6.5% ABV, 18 IBU dark wheat ale brewed for last month's Bodega-Fest and Yo Ho Ho Gold, a 5% ABV, 30 IBU kolsch-style ale brewed for the Pirate Pub Crawl.

King Street Brewing has brewed another batch of its German Bock, first released last January, and it's back on tap for the holidays.  Here's how they describe it:

King Street’s Bock is a dark, malty lager brewed in the German tradition, with European malt and hops to enhance rich and complex grain and caramel flavors.  Our interpretation has an almost plum or grape like flavor with a whisper of chocolate that is so deep that one might think it a Dooplebock (Double bock).  However, like our previous bigger winter releases, this lager beer is oh so easy to enjoy more than one glass of.  The Bock will go equally nice with savory meats and cranberry sauce!

At the Snow Goose's First Firkin Friday last week, the special was a firkin of Fish On! IPA, dry-hopped with Simcoe and Amarillo.

Tonight at Glacier BrewHouse is the Winter Warmer Dinner. Tickets are $80 all-inclusive. I don't know if there are any seats left, so call for reservations ASAP. You can see the entire menu of food and beer here. Even more exciting, tomorrow begins Glacier's annual Twelve Days of Barleywine.  Here's the daily menu:


At Kenai River Brewing, a couple of new beers have been on tap.  The first is Chris's-mas Spruce Tip Ale, a English-style Winter Warmer brewed with locally gathered spruce tips by Chris Scudder back in August. I had some of this at the Kenai Peninsula Brewing & Tasting Society's Christmas Party and it was delicious. Not sure if there is any left, as the supply was limited and it was going fast. The other beer is the next in Kenai River's Single Hop IPA series; this one si hopped exclusively with Galaxy hops.

Let's move on to some long-promised reviews of aged beers from my beer cellar.

Deschutes The Abyss Russian Imperial Stout, 2011 vintage: It poured opaque with a big tan head; still plenty of carbonation even after three years. The aroma was of roasted and sweet malt, with the roasty notes beginning  to take a back seat. The mouthfeel was excellent, very chewy and oily. The flavor profile was dark, deep, and rich, with elements of coffee, molasses, and chocolate. Not a hint of the 11% ABV alcohol, and a long, satisfying finish. This beer is exceptional right now; I really don't see how it could get much better, so if you have any in your cellar, I'd recommend at least sampling a bottle.

Deschutes The Abyss Russian Imperial Stout, 2012 vintage: I opened this beer to get a comparison point with the beer above. The taste profile was very similar, except that I thought the flavors had not yet quite come into as perfect a balance as they had with the 2011. Still delicious, but I'd recommend letting it sit for another year.

Alaskan's Barley Wine, 2011 vintage: It poured a deep, translucent ruby with a small cream-colored head that dissipated quickly to a collar. Carbonation was beginning to fade, but was still acceptable. There were still some hop notes in the nose, but these were also clearly on the downhill side. Mouthfeel was good, and the flavor profile was beginning to slip out of balance as the hop bitterness decreased. I also thought I picked up the faintest hints of sherry-like oxidation. To my palate, it seems this beer is just slightly past its prime; if you have any in your cellar, I'd recommend opening a bottle for evaluation, lest you be disappointed in another year.

Sierra Nevada's 30th Anniversary Grand Cru (2010): Here's a lesson for all you would-be cellar masters out there: keep track of your stock. I let this excellent beer get pushed to the very back of my beer frig and then sit there for four long years. It should have been consumed at about the one year point, I think. When I finally opened it, time had taken a toll on its big hop flavors, leaving mostly malt and oak. It was still an okay beer, but in no way comparable to what it was fresh. 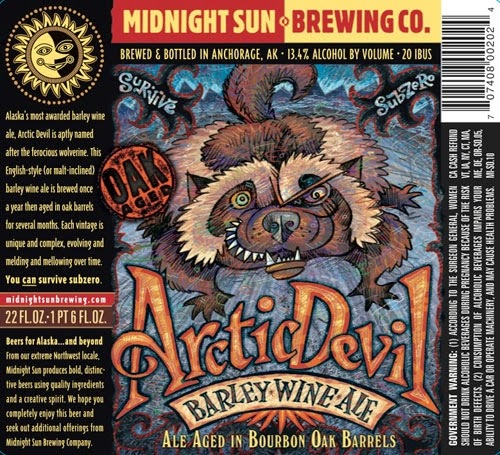 Midnight Sun's Arctic Devil Barley Wine, 2011 vintage: It poured a dark, semi-translucent ruby with a small but persistent cream-colored head. The nose was primarily sweet malt and oaky notes; not much bourbon aroma left. Carbonation was still, good, and the mouthfeel was excellent. The flavor profile is still in balance, with plenty of oakiness to balance the honey-like malt sweetness and a bit of alcohol heat. Excellent now, but it might be able to age for another year, as there is no hint of oxidation.

That's it for this blog. As mentioned in the title, Drinking on the Last Frontier will be going on hiatus for one month, until the middle of January. Besides the impending holidays and all that they entail, I am pushing hard to finish writing a book, and I just cannot squeeze out enough time to do that and still do justice to this blog. The book, by the way, will be titled Alaska Beer: Liquid Gold in the Land of the Midnight Sun and is scheduled to be published in late March by The History Press as part of its American Palate series. You can learn more about it here.

Meanwhile, I wish each and every one of your Happy Holidays and a joyous New Year. See you in January.

Until Next Time, Cheers!