At 2 PM today, Anchorage Brewing Company will be releasing a limited amount of its The Darkest Hour Imperial Stout that has been aged for 1 year in Spanish Brandy barrels. You can buy individual bottles to go or enjoy a glass at the brewery. Delicious Daves will also be at the brewery, serving up his excellent ramen. As they say on TV, supplies are definitely limited, so don't miss out on this special release.

If the Moon Under Water Held a Beer Festival...

We've got a beer festival taking place here on the Peninsula this weekend. The 3rd Annual Frozen River Fest will be held from 4 to 8 PM Saturday, February 18th, in Soldotna Creek Park. I'll have some more info on it below, but it got me thinking about beer festivals.

On February 9, 1946, an essay by the great George Orwell, entitled “The Moon Under Water,” was published in the Evening Standard of London. Orwell is better known today for his classic dystopian novel 1984, but he was also an accomplished essayist, and this particular essay provided a detailed description of his favorite London pub, named The Moon Under Water. Every beer drinker should read this essay, so if for some reason you haven't yet dones so, take five minutes, click on the link above, and read it. Trust me, it's worth the short amount of time it will take. For those of you familiar with the essay, you will recall that the twist at the essay’s end is Orwell's admission that The Moon Under Water doesn’t actually exist; it represents his idealized version of the public house. In the spirit of Orwell, let’s consider the following thought experiment: If The Moon Under Water, the perfect pub, ever held the perfect beer festival, what would it be like?

First and foremost, there would have to be good beers on offer. The ideal festival would offer beers not readily available, either because they come from breweries whose beers aren’t normally distributed in the area where the festival is located, or because the beers are limited releases that are typically only available at the brewery itself, or best of all, beers that were brewed specially for the festival. Given its size and the remoteness of some of its breweries, Alaska makes being able to sample multiple breweries in a single location a powerful attraction.

Second, the festival goers would have to be there for the right reasons, i.e. to enjoy and experience the beer, not just to get drunk. This can be a problem with some of the bigger festivals out there (Yes, I’m looking at you, Great Alaska Beer & Barley Wine Festival). Festivals should be cheerful and pleasant events, without a lot of heavily intoxicated individuals wandering around and causing disruptions. One way to address this is through the pricing structure. You can either charge a lot of money and limit the number of attendees (the model used by The Culmination Festival in Anchorage) or you can have a “pay for your drinks as you go” festival (popular in Europe and the model used by the Frozen River Fest in Soldotna). It seems that having to pay for each individual beer (as opposed to being handed a fistful of sample tickets upon entry) encourages people to slow down and enjoy what they are drinking, instead of trying to “drink their money’s worth.”

Third, there should be plenty of good food available. Good beer is enhanced by good food, and vice versa. A festival with vendors offering a variety of tasty and reasonably-priced foods to accompany its beers will always be much more pleasant than one offering either no food or over-priced, tasteless fare.

Fourth, the best festivals have something to offer the non-drinker as well. Whether it’s by offering good live entertainment or games for the kids, the best festivals recognize that not everyone can or wants to consume alcohol. Designated driver tickets are also an excellent idea; allowing non-drinkers to attend for free or at greatly reduced prices makes it that much easier for drinkers to get home safely. And if the festival is doing a good job with priority #2 above, there should be no problem with having children in attendance. The consumption of alcohol is a normal human activity; it shouldn't need to be hidden away behind walls and barriers.

Fifth, the festival should have a great location, ideally outdoors in good weather. While this isn’t always possible, especially here in Alaska, it’s still something worth striving for. There’s a reason that a place for consuming beer is called a “beer garden”; beer just naturally goes down well in a pleasant, outdoor setting. It’s a bonus if there are other breweries/beer attractions nearby. After all, some attendees may be coming from quite some distance, so the more beer activities they can partake in, the better.

So that's my list of the attributes of the perfect beer festival. We've got a lot of good ones here in Alaska, and a couple of them come pretty close to this platonic ideal, but none of them check all the blocks, just as no pub in London actually fulfilled all of Orwell's criteria. Still, we can keep trying to get there.

As I mentioned above, the 3rd Annual Frozen River Fest will be happening this Saturday. As a lead-in to it, there will be two beer dinners in the local area. On Thursday, 2/16, at 6 PM, Kenai River Brewing will be hosting its first ever KRBC Frozen River Fest Dinner. Here's the menu:


As you can see, tickets will be $70, and I'm told that attendance will be limited to 40 people, so you should call and reserve your seats ASAP. I've got my ticket and am looking forward to it.

On Friday night, 2/17, The Flats Bistro in Kenai will be reprising its successful beer dinner from last year. If you were lucky enough to attend this one in 2016, you know what a wonderful time it was for everyone there. I acted as master of ceremonies last year, and I've been asked to do so again so I will be introducing each meal course and the beer accompanying it. Here's what you can expect at this dinner:

Hoodoo Brewing's German Kolsch & Kenai River Brewing's Honeymoon Hefe. Those two will be served with a trio of appetizers.

I don't have any price information yet, but if you are interested in attending, I'd call The Flats at 335-1010 and make a reservation. Last year the event sold out rather quickly. 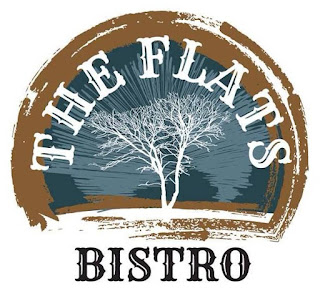 After the dinners on Thursday and Friday evenings, Saturday will be the main event, from 4 to 8 PM, at Soldotna Creek Park in downtown Soldotna. Admission for non-drinkers is free, and children are welcome, so long as they are accompanied by a parent or guardian. Drinkers will pay $15 for a wristband, a 16 oz. mug, and two drink tokens. Each token gets you an 8 oz. pour, and more tokens are available at $3 each. There will be live music by Todd Grebe and Cold Country and Big Fat Buddha. There will also be games for kids like archery and kick sleds. Plus several food vendors. Last but certainly not least, there will be some fifteen breweries in attendance. If you want to purchase tickets in advance, you can do so on the Soldotna Chamber of Commerce's website. 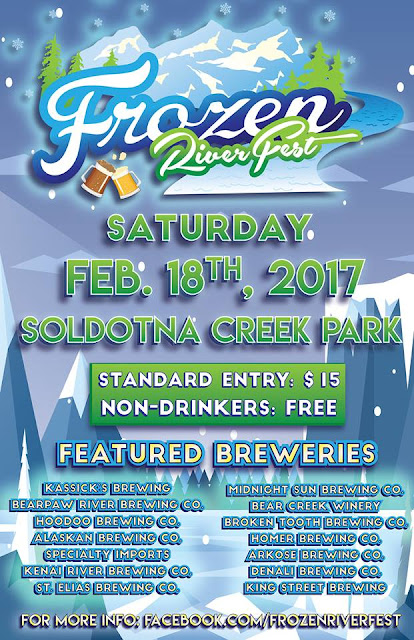 In other news, Girdwood Brewing has finally received the last of its brewing equipment from Premier Stainless. It's looking good for them to be open to the public by the end of March.


Cooper Landing Brewing Company continues to make progress towards being licensed. You can read about its latest developments in the Turnagain Times.


Let's do some beer reviews. With my renewed emphasis on revisiting old favorites lately, I haven't sampled that many new beers, but I do have three to offer you.

St. Elias Brewing's Pre-Prohibition Lager: This latest offering from Zach Henry poured a clear gold with a nice white head that slowly dissipated to a collar. The aroma was clean, malty notes with little to no hops presence. Carbonation was good, and the mouthfeel was light. On the palate, there was again lots of clean malt flavors, with just enough hop bitterness to balance things. A smooth and refreshing beer, much more malt forward than St. Elias Brewing's flagship Czech Pilsner. If malt is your thing, this is the brew for you. 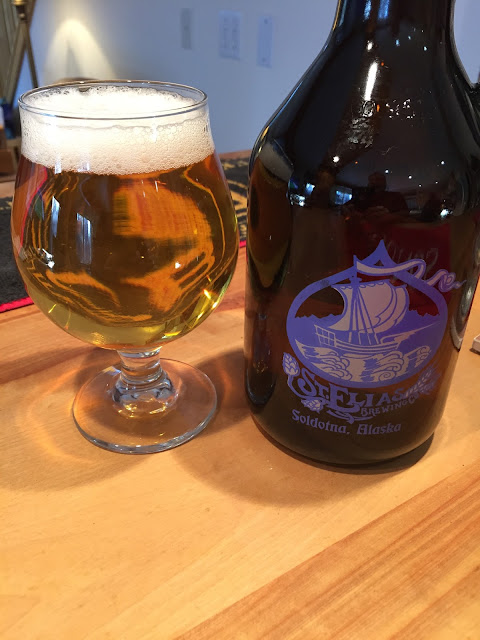 Samuel Smith's Organic Perry: Full disclosure: I received this bottle as a free sample from the importer. I'm not much of a cider expert and even less of a perry one, but I thought I'd take a stab at reviewing this. Perry or pear cider is growing in popularity on the heels of the explosive growth of apple ciders. It poured a light and sparkling gold color, similar to a champagne. The nose had faint but definite notes of pears. The carbonation was good and the mouthfeel was light. On the palate is was crisp, slightly tart, and very refreshing, with lots of pear flavor. Overall, I say it was most like a fruity white wine. While beer still remains far and away my tipple of choice, the perry made for a tasty change of pace. 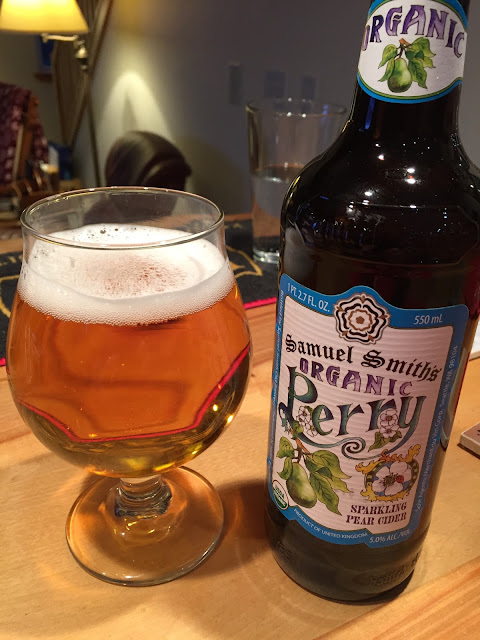 HooDoo Brewing's 2017 Tusk Barley Wine: I was able to score a couple of bottles of this at La Bodega in Anchorage. One went straight into the beer cellar, but I decided to sample the other one. First off, the bottles are numbered; the total run size was only 1150. Second, the beer is a blend of three different batches of English-style Barley Wines:

It poured a translucent honey color with a small, cream-colored head that dissipated quickly to a collar. The aroma of the wheat whiskey was strongly present in the nose. Carbonation was acceptable and the mouthfeel was medium.The flavor profile was of smooth malt notes, plus a significant contribution from the whiskey barrels, moving to a large amount of alcohol warmth on the finish. It will be interesting to see how the flavor profile shifts with time in the cellar; fresh, it's a big and boozy barley wine. 9.2% ABV. 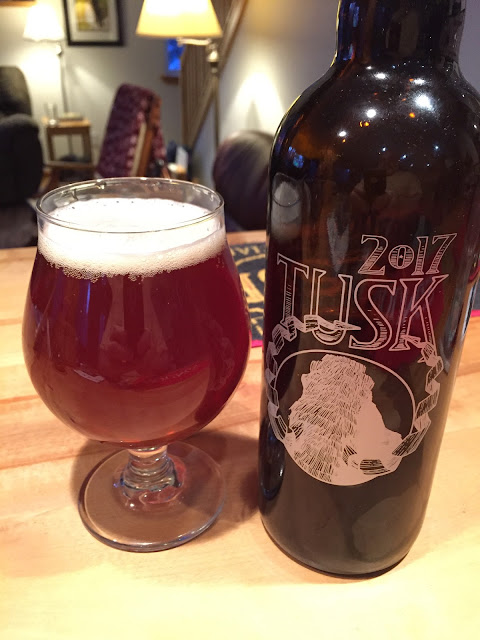 That's it for this time around. Hope to see you at the Frozen River Fest this Saturday.

Until Next Time, Cheers!