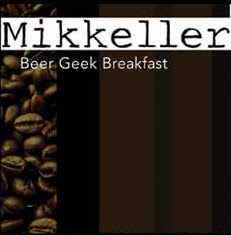 I like coffee. That's no surprise, as it's a rare career Navy guy who doesn't end up hooked on it. When I went on active duty, I rarely drank coffee and when I did it was with cream and sugar. By the end of my first sea tour, I was slurping it down by the black-and-bitter bucketful.

Twenty years later, I still crave my morning shot of caffeine to get things rolling along. These days, I drink coffee in the morning, water in the afternoon and beer in the evening; coffee after lunch tends to make me too wired for the academic world in which I work these days. But there are more than a few folks out there who like to have their beer and coffee at the same time.

One of the brews for those folks is Beer Geek Breakfast from the Mikkeller Brewery in Denmark. Founded in 2006, this brewery is one of the growing number of new, upstart European breweries inspired by their American craft brethren. It was founded by Mikkel Borg Bjergsø and Kristian Klarup Keller, two Danish homebrewers; since August, 2007 Mikkel Borg Bjergsø has run Mikkeller by himself. The brewery has garnered numerous awards for its boundary-testing brews of uncompromising quality.

Stylistically, Beer Geek Breakfast is an oatmeal stout with gourmet coffee added. It pours absolutely black, like an espresso, with a nice tan head that lingers and leaves plenty of lace on the glass. The aroma is full of roasted notes, both from the roasted barley and from the coffee. On the palate, it's an excellently balanced beer, with enough malt backbone to support the bitterness from the coffee. The flaked oats helps produce a smooth mouthfeel which also rounds off any rough coffee edges. It's hopped with Centennials and Cascades (good American hops!) and comes in at 7.5% ABV, making it a nice sipping beer. Not sure it's to every one's taste as their morning eye-opener, but it's a darn fine choice for us beer geeks!

Mikkeller is an excellent example of an interesting new trend in European brewing. From the earliest days of the American Beer Renaissance, our home- and micro-brewers looked to the great brewing traditions of Europe as a source of inspiration. Small Belgian farmhouse brewers, British regional brewers, and traditional German lager breweries all provided examples of the styles and quality of beers that American craft brewers strove to emulate. Now, however, the shoe is on the other foot. Young European homebrewers are looking to American craft beers and opening their own breweries to produce similarly "big" brews. BrewDog Brewery in Scotland, Nogne O Brewery in Norway, and on and on; these young brewers are carrying the gospel of craft brewing back to the land of its roots.

Returning to the subject of beers made with coffee, their are a couple of excellent Alaskan examples to check out, if you can't scare up a bottle of Beer Geek Breakfast. The first beer in this year's Crew Brew Series from Midnight Sun, Brewtality, is a black lager, a shwarzbier, with espresso added. Checking my notes, I realized that I mentioned drinking this beer back in my 3/9/2009 blog, but never gave a real review. So here it is:

Pours a lovely black (just like espresso) with a nice creamy tan head. The aroma is strongly of coffee, darkly roasted, with a hint of chocolate sweetness. The taste is strongly of of coffee, but with none of the acidity you sometimes get with coffee beers. Plenty of smooth sweetness beneath the coffee flavors, with hints of vanilla flavors. At 19 IBUs, hops are not a big player here, and the 9.7% ABV command respect. For a beer with so many big flavors, Brewtality does an excellent job of keeping everything in balance. If you like coffee beers, this one is a great one.

In addition to Brewtality, Midnight Sun also offers Arctic Rhino Coffee Porter, one of its year-round brews. I'll try to get around to reviewing it soon.

In local beer news, Kassik's Kenai Brew Stop released their Smoked Imperial Russian Stout five days early, on Dec 8. I plan to head over in the next day or two to pick some up; I'd suggest you do the same.

Zach Henry sent me an email to say that St. Elias Brewing has a new beer on, Snow Angel. This is an Imperial Pilsner that "screams HOPS! from every corner of its light malty body," according to Zach. Made with German malt and hops, this is a German pilsner on steroids. The bad news is that I think this probably means that the Bourbon-barrel Baltic Porter is all gone. A stop here is also on my to-do list for the next couple of days. Also, remember there's live music at St. Elias on Thursdays from 7 to 9 PM; this week 150 Grit will be playing.

Well, that's about it for now. Remember, there are only 10 drinking days left until Christmas.