Beer on the Last Frontier

Well, by now most of you should be aware of what I was talking about when I mentioned a "major announcement" back in my November 8th blog. Yes, I have written a book. In fact, to the best of my knowledge, I have written the first book that's exclusively about craft beer in Alaska.  What's more, it's only the first of three.

Beer on the Last Frontier: The Craft Breweries of Alaska will be released in three volumes (calling them volumes sounds a bit pretentious, but what the heck...).  The first volume, entitled Kenai Peninsula and Kodiak Island Breweries, is on sale now and covers the following breweries and brewpubs:

The book is profusely illustrated with color photographs and contains interviews with each of the brewers, as well as detailed information about the breweries and their beers.  Currently, it is only available via Amazon Kindle for $5.99, but it will hopefully be available in paperback from Amazon before Christmas for $8.99.  Note that the photos in the paperback version will be in glorious black & white; if you go with the electronic version, you'll get them in color.

My wife Elaine and I have been working on this project for the last eight months, and we're very excited to see it finally coming to fruition.  After the first of the year we will begin working on Volume II: The Breweries of Anchorage, Fairbanks, and Everywhere in Between. Once that book is done, we will move on to Volume III: Southeast Alaska Breweries.  Once we have covered the entire state, we will offer everything in a single volume.

If you're interested in picking up a copy, please click on the link to the left.  If you do read it, please give me some feedback, either here or on the book's Amazon page.

So long as I'm in the shameless self-promotion mode, I should mention that registration has opened for the college class that I teach each spring semester, CED A157 The Art & History of Brewing.  The class is held every Tuesday evening from 5:30 to 6:45 on the Kenai River Campus, starting on January 22, 2013 and running through April 30, 2013.  Besides my scintillating lectures, there will be brewery tours, guest lecturers, and -- best of all-- beer tasted in every class.  If you are interested, you can call 262-0330 for more details or for help registering for the class.  Tuition is $165 plus and $18 lab fee (to pay for the beer).  This will be my sixth time teaching the class and we always have a great time, so if you are at least twenty-one, live around Soldotna, and have Tuesday evenings free, it's a pretty good time.

Speaking of good times, it sounds like the beer tasting on November 17th at Mykel's Restaurant in Soldotna definitely qualified.  Gene Diamond of Specialty Imports walked everyone through a selection of their European imports.  The beers tasted were:

An outstanding list, and one that makes me sad I had to miss the event, though my agents gave me a full report afterwards.  Not to mention the outstanding appetizers the Mykel's served as accompaniment to these excellent beers.

While we're on the subject of beer dinners, Glacier BrewHouse in Anchorage has another great one on Wednesday, November 28th, at 6:30.  Head Brewer Kevin Burton selected five different brews to pair with each of the five course, including a limited release on the 2012 Salmonberry Wheat with the dessert course.  The cost is $75 (tip included) and I sure wish I could be in the big town to give it a try!

Also, mark you calendars: Glacier's Twelve Days of Barley Wine starts on Monday, December 10th, and runs through Friday, December 21st.  If you're going to be anywhere near Anchorage during that time, you really should stop by and stop by often.  Here's the list:

THE TWELVE DAYS OF BARLEYWINE

Sticking with Anchorage breweries, King Street Brewing Company has released a new beer, their Winter Warmer, to celebrate the 1st Anniversay of their Tap Room.

Not to be out done, Gabe Fletcher at Anchorage Brewing Company has taken delivery of an honest-to-God coolship, the first of its kind in Alaska.  Here's a photo of it that I "borrowed" from Jim "Dr. Fermento" Roberts' Facebook page: 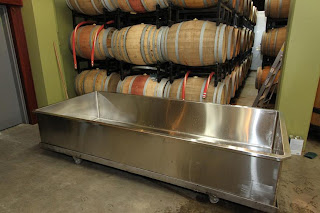 You'll notice it's on wheels, so Gabe can move it around his "Brett Cave" as required.

Also at the Snow Goose, Pamela Hatzis and the rest of her crew at La Bodega will be having a Christmas Party on Wednesday, December 5th, from 6 to 9 PM.  I'm told you should either wear holidays sweaters or Wild West attire...

I have also heard that The Last Frontier Brewing Company in Wasilla has a new brewer.  Peripatetic Alaska brewing pioneer Ray Hodge stepped down as brewer back on October 2nd and moved to Blowing Rock, North Carolina where he is involved in another brewery project.  His understudy at Last Frontier, Robert "Bobby" Martin has taken over the duties as Brewmaster.

Over at Midnight Sun Brewing Company, you can do your Christmas shopping for the beer geek on your list by getting him or her a stainless steel growler.  Based on the picture, I'd say they are black-finished Hydroflasks, with a silver MSBC logo.  A very useful gift. 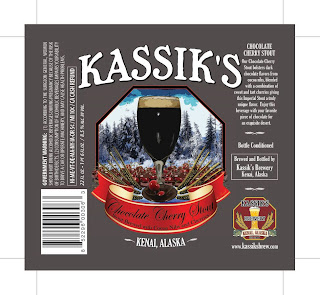 Moving down on to the Peninsula, Seward Brewing Company now has a new version of their IPA on tap. Sierra Nevada's 2012 Celebration Ale is on sale at Fred Meyer.    Kassik's Brewery has released their Smoked Russian Imperial Stout and their Chocolate Cherry Stout in bottles.  Also, they are offering a 15% discount on all merchandise (excluding beer and beer containers) through Christmas Eve.

Well, now that we've plowed through all that news, let's do some beer reviews. 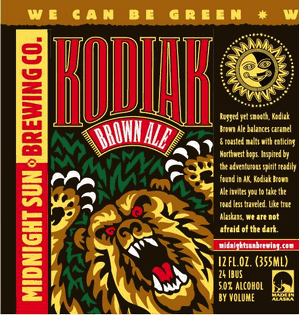 First up, Midnight Sun's Kodiak Brown Ale.  This is another beer that I've been drinking for quite some time, but never gotten around to reviewing, probably because I first tried it before I started blogging.  So let's correct that oversight.

Coming out of the can, it poured a a translucent ruby with a nice khaki-colored head.  The aroma was an appealing mix of roast malt, caramel, and Pacific Northwest hops.  Good mouthfeel, with the caramel malt leading the way, followed by a nice, balancing hop bitterness.  5% ABV, 24 IBUs.  The is a great, easy-drinking brown, perfect with a meal or as a relaxing choice after a hard day's work.

Now let's move on to two beers from the new Gigantic Brewery in Oregon, which I got to try thanks to the generosity of Rob Weller of Specialty Imports.  This brewery is getting as much buzz for its uniquely artistic labels as for their excellent beers. 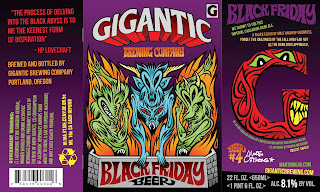 First up, Beer #4, Black Friday Beer, an Imperial Cascadian Dark Ale.  It poured black (naturally), with a big, dense tan head.  The nose was packed with citrusy American hop aroma.  Carbonation was good, with excellent up-front bitterness.  Unlike some versions of this style, Black Friday has zero roasted malt flavors; it's all about the hops with this one.  Extremely clean flavors, letting the hops stand alone on center stage. 8.1% ABV. 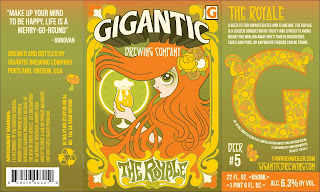 Beer #5 is The Royale. I'm a little unclear as to in what style category the brewer would place this beer, but I'd call it a Belgian Pale Ale.  It poured a pretty orange-gold color, with a dense white head.  The aroma is once again of citrusy hops.There's great carbonation and good mouthfeel, followed by lots of hop flavor and aroma, but not an excessive amount of hop bitterness, plus some Belgian yeast notes.  It does a nice job of showcasing the hops with also subjecting your palate to a ton of IBUs.    6.3% ABV and very nice.

Rob also gave me a couple of ciders to sample.  I would not claim to be a cider expert, though I did drink it fairly often when I lived in London.  I tried a bottle of Hogan's Dry Cider.  Cider is so different from beer that it always takes me a minute or two to recalibrate my palate from a carbonated, hopped beer to a flat, unhopped cider.  However, once I did so, I found I really like the Hogan's.  It was very dry, but unoaked, so the quality of the apples used really shown through.  It was 5.8%ABV.  If you enjoy ciders, I encourage you to give those made by Hogan's a try. 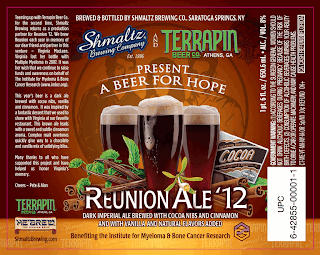 I also got to try Reunion Ale '12, a collaboration brew from Shmaltz Brewing Company and Terrapin Beer Company.  This beer has an absolute ton of stuff going on, as it's made with cocoa nibs, cinnamon, AND vanilla.  It poured dark with ruby highlights and a big but not dense khaki head.  All three of the special ingrediants were evident on the nose.  It was unexpectedly light on the palate, perhaps even a bit too thin.  The cocoa lead off the flavor profile, with the cinnamon making its presence felt via heat on the tongue.  Overall, I found it a very interesting combo, but not more-ish, as the intensity of the spices brought on rapid palate fatigue.  8% ABV. 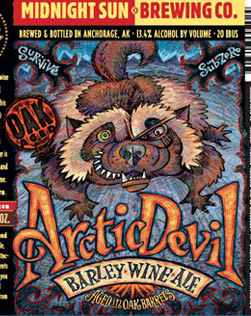 Finally, I did a couple of "reach backs" into my beer cooler last week.  The first was on Tuesday, to celebrate my book being published.  I pulled out a bottle of Midnight Sun's Arctic Devil Barley Wine.  It had no label date, but I think it was from 2008.  Whenever it was from, the cellaring had made it magnificent.  The flavors had melded to perfection, the alcohol was deliciously warming, the mouthfeel was rich and complex... in a word, it was sublime.  As good as Arctic Devil is upon release, I'm firmly convinced that three or four years in the cellar makes it substantially better. 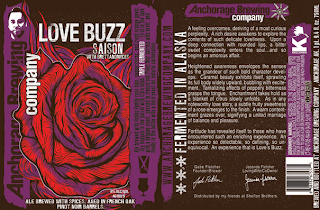 My second reach back was a Batch #1 bottle of Love Buzz Saison from Anchorage Brewing Company, released in August of last year.  since it was bottled with a dose of Gabe Fletcher's signature brett, I fully expected that 14 months in the bottle would resulted in a much drier and funkier brew.  I was not disappointed.  My tasting notes from 10/12/2011 don't even mention any brett notes, but they are certainly there now.  The beer was bone dry, with the spiciness I tasted a year ago still present, but now mixed with a significant amount of funkiness.  It's a totally different beer, but still delicious.  If you've got any Batch #1 Love Buzz squirreled away, I recommend pulling a bottle out and giving it a try.

Well, that's about it for this week.  I hope you all had a Happy Thanksgiving.  I should be back next week with more news and reviews.