Sorry for the lack of blog last week.  It's a been a very busy time for me at work, so busy in fact that my lunch hours (AKA quality blog time) have turned into "lunch ten-minutes", while I wolf down some food before diving back into the fray.  Today I'm taking the entire hour with a shut door so as to remain undisturbed and get this bad boy out on the street.

Elaine and I decided the weather wasn't too scary last Saturday, so we risked a shopping trip to Anchorage and back.  Our timing was good, since the weather turned pretty horrible the very next day.  Anyway, as part of our trip, I finally got to stop by the brand new King Street Brewery to check things out. (Photos courtesy of my lovely wife, Elaine.  Thanks, Honey!)

When we rolled in just after 4 PM, David Short and Dana Walukiewicz were working behind the bar.  As you can see from the pictures, they have a very nice Tasting Room in the front of the brewery.  David and I had been exchanging emails for a while, so it was good to finally meet him.  Since this was our last stop before the 150 mile, 3+ hour drive home, I opted for the four sample flight, instead of the seven sample one.
The four beers I sampled were:

I really enjoyed the Pilsner.  Dana told us that he had lived in Prague for several years and how much he missed the truly fresh Czech pilsner.  Having visited Prague myself, I knew exactly what he meant.  His take on this classic had the crisp, clean taste you'd expect, plus plenty of noble hop flavor and aroma.  Beers like this remind you of why pilsners took the world by storm in the second half of the 19th century.

The IPA was also quite good, with a complex hop profile.  I believe I was told that something like seven different varieties are used, and it has a ton of classic American hop flavors, like grapefruit and pine.  It was refreshingly drinkable, not a complete palate-wrecker like some popular IPAs.

The Wit was quite nice, though my palate wasn't really up for it after the IPA.  Their Stout was served on nitro, so it had a wonderful creamy texture, as well as the expected roasty flavors.

I didn't try their Busted Blonde (4.7%), their Amber (5.1%), or their Hefeweizen (5.7%).  That will give me something to look forward to next time.  As I was finishing up my samples, another of the principals, Shane Kingry, walked in.  He was nice enough to give us a quick tour of the brewery itself.  The 10 bbl brewhouse is gorgeous; it's brand-new, with all the latest stuff.  It's obvious that a lot of thought went into the brewery layout, and there's plenty of room for future growth.

In summary, I was really impressed with King Street Brewery.  The beer was excellent, the facilities were first-rate, and the people behind the process were both friendly and obviously know what they're doing when it comes to brewing beer.  I plan to make King Street Brewery one of my regular stops whenever I visit Anchorage, and I'm looking forward to seeing them down here at the Second Annual Kenai Peninsula Beer Festival next summer.

Turning to the Anchorage Brewing Company, it looks like The Tide and Its Takers Tripel is still bottle conditioning, as I haven't heard that it's been released yet.  But here's the label for a new beer that Gabe Fletcher will be releasing early next year (hopefully in time for the Great Alaska Beer and Barley Wine Festival on 20 January): Galaxy White IPA.  Check out the awesome back label, written by yours truly.  This is a beer I'm really looking forward to tasting!

Rob Weller at Specialty Imports notified me by email of several new beers that they will be bringing into the state.  I don't know how many of these will actually make it down onto to the Peninsula, but if you're looking for them locally, you best bet is probably Country Liquors in Kenai.  Here's the list:

Keep your eyes open for these brews, as they are all well worth trying.  Hopefully I will be able to snag examples of each to review.

Speaking of Country Liquors, they have plenty of Christmas beers in, especially those from Ridgeway Brewing in the UK (Bad Elf, Seriously Bad Elf, Lump of Coal, etc).  They did have some of  Deschutes Brewing's 2011 Abyss Imperial Stout in, but I'm afraid the local beer geeks have cleaned them out, at least of their initial batch.  I got my two bottles... 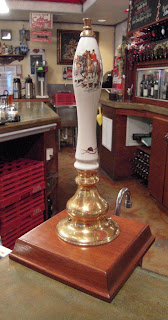 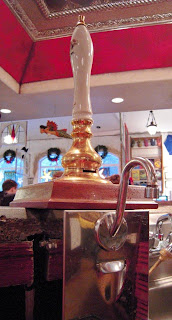 The very first (to my knowledge) hand pump on the Kenai Peninsula.  Perhaps they had some here a century ago during the Gold Rush days; I suppose they must have.  But if we limit ourselves to "modern" times, this is certainly a first.  Well done to Zach Henry and the rest of the crew at St. Elias for being willing to take the plunge and install a true beer engine.

I was there on Friday, December 2, when Zach started pulling pints from a cask of Mistletoe Porter.  Currently, St. Elias only has 4.5 gallon casks, so they will not last long, even with cask breathers. Wehn you go in, you'll have to ask the bartender if they happen to have one on or not.  Eventually, Zach plans to purchase 9 gallon firkins, which should enable them to have cask available on a more continuous basis.

I was once again reminded of what a difference cask makes last Sunday.  The Kenai Peninsula Brewing & Tasting Society was holding its Christmas Party at St. Elias and the hand pump was serving their award-winning Moose Juice Barley Wine.  When I had a glass on hand pump, it tasted so different, that I actually got a sample of the draft version to compare side by side, just to be sure my memory wasn't playing tricks.  It wasn't; the cask version was significantly smoother and creamier, with the much more delicate carbonation characteristic of cask-conditioned beers.  Most excellent.

Also on last Sunday, Kassik's Brewery had their Christmas Party, featuring Beer Brats, a Chinese Gift Exchange, and a vertical tasting of their 2007, 2008, 2009, & 2010 Barley Wines.  It sold out and judging by the photos on their Facebook page, it was a great time.  Keep your eye out for future food events to be held at the brewery.  If you're looking to finish up your Christmas shopping, they still have a few Morning Wood ornaments left, and they've got Penny Porter and Big Nutz shirts and hoodies. 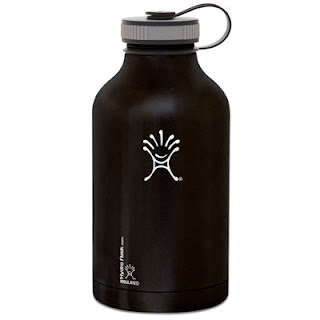 Over at Kenai River Brewing, they celebrated the anniversary of the repeal of Prohibition on December 5th with $4 growlers of their Hoppin' Salmon Wheat, so I stopped by and broke in my brand new Hydroflask stainless steel growler.  It's a little pricey, but it does a ridiculously good job of keeping beer cold, plus it doesn't sweat and it's unbreakable.  I stopped by again on the following Monday to wish Doug a happy birthday, only to be offered a dark chocolate bacon cupcake.  I know it sounds wrong, but believe me, bacon goes with everything...

They also have a new beer on tap, Holla Day.  It something new for them, a dark beer brewed with both Belgian and American yeasts.  Doug Hogue reports that it's not overly strong, but has some spicy notes from the Belgian yeast and a touch of smoke, thanks to a little smoked malt.  I haven't tried it yet myself, but I'm planning to grab a liter.

Other release news: this year's Celebration Ale from Sierra Nevada has arrived in state.  This is a classic holiday brew, beloved by beer geeks young and old.  I grabbed a six-pack in Anchorage on Saturday.  It will be in our local stores soon, if it's not here already.

On to the beer reviews.  I've got two for this time around. 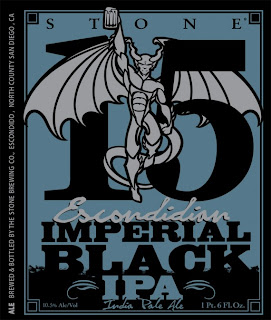 First, Stone Brewing's Escondidian Imperial Black IPA. This beer was released back on August 15th, to mark Stone's 15th anniversary.  You can always count on Stone to do something interesting for their anniversary beer, and this year is no exception.  At 10.8% ABV, the "Imperial" on the label is no lie.  It poured as black as a moonless night, with a huge tan head.  The nose was pure hops, with absolutely zero roasted malt component, but a touch of alcohol heat.  On the palate, there's some serious hop bitterness with decent carbonation.  The roastiness is again noticeable by its absence, making a belated appearance just at the finish.  The alcohol and massive bitterness make this brew a sipper, with the 22 oz bottle best shared amongst two or three hopheads who don't mind obliterating their tastebuds.  Exactly what it claims to be, a strong, bitter, black brew. 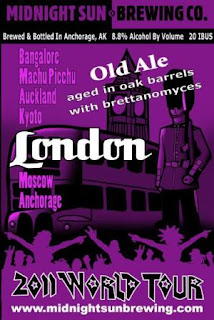 My second beer to review is vastly different than the Stone brew, but just as challenging in its own way. Midnight Sun's London Old Ale is the fifth entry into this year's World Tour series.  It's brewed from the second runnings from their Arctic Devil Barley Wine, and aged in oak barrels with brettanomyces.  Even though it's made from second runnings, it's still 8.8% ABV.  It poured a semi-translucent ruby color, with a nice cream-colored head.  The nose consisted of malt, brett funk, and some woody notes.  Mouthfeel was good, with no hop bitterness to speak of (only 20 IBUs), but plenty of rich, malty flavors, vanilla, other woody notes, and a hearty dose of barnyard funkiness, which became even more pronounced on the finish. The beer was initially at about 50 F, but as it warmed, even more flavor elements made themselves felt.  This is an incredibly complex and rich beer, made for long, slow and deep study.  I have a feeling that this brew is very close to the legendary stock ales of 19th century Britain, strong beers that spent considerable time in the wood and picked up their famously "stale" flavors from brettanomyces.  In fact, brettanomyces is simply Latin for "British Yeast", so named because it was first isolated from wooden British beer casks.  So if you like the funk and what to taste some history, give London Old Ale a try.

That will wrap it up for this time around.  I will do my best to get another blog out before Christmas, but should I not make it, here's wishing you and your a Merry Christmas and a Happy New Year!

I'm Bill Howell.
I live in Sterling, Alaska, United States
I'm a retired naval officer, and I have also retired from my second career as the Student Services Director of Kenai Peninsula College. These days I am a full-time Assistant Professor of Process Technology at Kenai Peninsula College, part of the University of Alaska. I've been homebrewing and drinking craft beer for over twenty years. I teach a college course called The Art & History of Brewing. I write a monthly beer column for The Redoubt Reporter newspaper. I was the Alaska Correspondent for the Northwest Brewing News, until its untimely demise, and I was selected as Wynkoop Brewing's 2010 Beerdrinker of the Year.