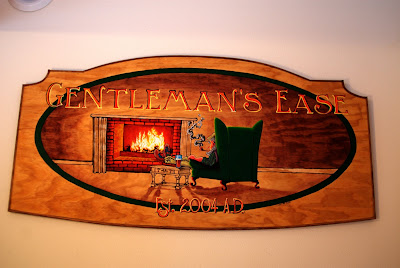 I had a long-held wish come true over the holidays: I finally got a custom sign for my home brewpub.

Pubs have a long and fascinating history, dating back many centuries. They have been the subject of more than one serious scholarly study; check out The Enduring Appeal of the Local by The Social Issues Research Centre in Oxford, UK for one such. Their location, their architecture, their floor plans -- all encapsulate an amazing amount of history. Their names are no different.

Have you ever wondered why so many pubs have names that evoke a visual image? The Rose & Crown? The Fox & Hounds? The Beehive? The Carpenter Arms? It's because when pubs first came into existence, the vast majority of their patrons were illiterate. So pubs became identified by the pictures on the signs hanging outside. Even as more folks learned to read, the tradition of colorful, visually vibrant pub signs continued. In my mind, no self-respecting pub could get by without a colorful sign.

As for the name, The Gentleman's Ease, while riding a bus during a visit to Ireland in 1995, I saw a pub in Cork by that name. Oddly enough, I don't recall it as even having a pub sign and I never went inside it, but the name stuck in my head. Eventually, I dreamed up the image of a man in an easy chair and earlier this year I found a local artist who was willing to work up a design and then paint a sign for me. I had to wait about 6 months for the entire project to be completed, but as you can see in the picture above, it was worth the wait.

We're moving into to the beer festival season here in Alaska. This Friday, 1/8/2010, we will be having a Beer Tasting and Auction Fundraiser at the Challenger Center in Kenai. See my last blog for the details, but I'll be there pouring 4 of my homebrews, along side our local breweries.

Next week, there will be several beer events up in Anchorage, culminating in the Great Alaska Beer and Barley Wine Festival at the Egan Center on 15 & 16 January. Some things to take advantage of in the lead-up include:
These events (and hopefully additional ones in coming years) should help make the week leading up to the festival into a true "Alaska Beer Week", something to encourage beer lovers to make the trek all the way to Anchorage in January. Several other beer venues have already done something similar; now it's Alaska's turn!

Speaking of turns, it was my turn to get a package from the East Coast, in response to a package of big Midnight Sun brews I sent there in early December. Included in what my contact sent me were a couple of brews from Smuttynose Brewing Company's Big Beer series. I got a Baltic Porter and an Imperial Stout, a couple of my favorite styles. They were both excellent brews, with lots of great roasted flavors and great mouthfeel.

Checking out their website, it looks like they brew about eleven of these "big" beers annually, so if you're lucky enough to live somewhere on the East Coast and can get your hands on them, I'd heartily recommend it.

Well, that's it for this week. Keep an eye out for my monthly column in this week's Redoubt Reporter and I'll try to get a blog in next week before departing for Anchorage next Thursday. Keep your fingers crossed for good weather this year!

That is a beautiful sign. It seems to fit just right for you.

Thanks! Been a long time coming, but I'm very happy with it.

Now I just have to figure out how to install a handpump...