Oktoberfest Behind, Halloween Ahead 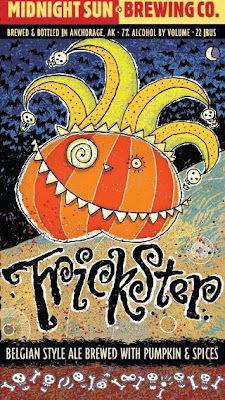 I had planned to start this blog off with a long rant about how lousy the beer scene in Mississippi was. Now, given how much good Alaskan beer stuff I have to write about, I figure, what's the point? So, I'll just say that if you're unfortunate enough to have to spend any length of time in The Magnolia State (especially the parts of it far from its Gulf Coast), Bring Your Own Beer. 'Nuff said.

Now, let's talk about what going on around here.

First, I got to dive into some of Kenai River Brewing Company's Winter Warlock Strong Ale. This year's batch is just as good as last year's, so you can check out what I wrote about it back on September 8, 2008. This time around, I'll just say that it's a superb beer and just the sort to sip on a cold night in front of the fire. Get some before it's gone for another year.

Second, my lovely wife Elaine and I made it to St. Elias Brewing Company's 2nd Annual Oktoberfest last Saturday. We were in and out before the traditional German band started playing at 7, but I did get to try a glass of Zach Henry's latest creation, a Baltic Porter, brewed with vanilla and sour cherries and aged in a Heaven Hill bourbon cask. Baltic Porter is a style that lends itself to this sort of thing, having enough basic solidity to stand up to all of the additions, and this latest batch is excellent. It's absolutely opaque in the glass, very rich and thick on the tongue, and bursting with different flavor notes from the wood, the vanilla, and the cherries. It reminds me of Midnight Sun's Lust, the last of their Seven Deadly Sins beers. It's by the glass only, and deservedly so

Also just on tap is their Harvest Brown Ale. I only had a very small sample (since I'd spent so much time nursing my glass of Baltic Porter), but the bit I tasted struck me as being very drinkable, with no tremendous highs, lows, or sharp elbows to put anyone off. This would be a great beer to offer to someone as their first experience with craft beer, or if you are planning to drink several in a session and don't want to fry your palate. Like most brown ales, the emphasis is on the malt, not the hops, and on ease of drinking . It's a real session beer. Those are my first impressions, based on a small sample; I might decide to revise them when I get a chance to work my way through a pint!

More news: on the way into the pub, I bumped into Doug Hogue of Kenai River on his way out. We chatted for a few moments and he gave me a head's up on a couple of new brews he's planning. No details, but Doug says he's planning a milk stout and a -- wait for it-- mild ale! Since I've been after him to brew a mild ale for months, this is obviously music to my ears. I'm also looking forward to tasting his take on a milk stout, another relatively rare style. Next time I can catch Doug when I've got a paper and pen in hand (as opposed to a hungry spouse in tow), I'll try to get more details on his plans.

On Monday and Tuesday I was scheduled to staff my college's table at the Anchorage College and Career Fair, so on Sunday afternoon my wife and I traveled up to the big city. In the course of two days, in between fair sessions, we hit several beer spots, including Glacier Brewhouse, Sleeping Lady, Midnight Sun, and Humpy's. Here are some highlights:

At Glacier, I got to enjoy a glass of their cask-conditioned India Pale Ale, delivered via handpump. Cask-conditioned ale is a truly unique experience; if you haven't been lucky enough to try it in Britain or from one of the small (but growing) number of American establishments who offer it, you are really missing out on one of the great beer-drinking experiences out there. Glacier's version was a little cloudy (it didn't appear to have "dropped bright" as the Brits say), but the flavor and aroma were exceptional. Lovely, fresh, with the loads of hop aroma. In fact, when I followed it up with a glass of their Double IPA, I thought the Double on draft had less of a hop presence than the plain IPA on cask! Not that it wasn't a good beer, but that IPA on cask was just so wonderfully hoppy!

We hit Humpy's for dinner Monday night, after a long day of talking to prospective students. I needed an immediate attitude adjustment, so I started with a glass of Delerium Tremens Tripel from Brewery Huyghe in Belgium. Most beer geeks are familiar with Delerium Tremens and their pink elephant label, but this was the first time I'd seen their Tripel on draft. It was a lovely looking beer in the glass and very tasty, with plenty of alcohol to get my evening relaxation going. It was perhaps a little too phenolic to be a truly great tripel, but it was certainly a good one, and I enjoyed it.

Next, I wanted something a bit lower in alcohol to enjoy with the pizza I had on the way, so I ordered a pint of Denali Brewing Company's Chuli Stout, on nitro. This beer was delicious, with the full body and roasted notes you'd expect from a classic American Stout, and the smooth creaminess that nitrogen produces. Given my experience with their Mother Ale a few weeks ago, I'm happy to report that this beer was in excellent shape and a real pleasure to drink. I hope that Denali Brewing can continue to expand; I'd like to have the opportunity to taste more of their brews, or even see them on tap down here on the Peninsula.

Tuesday, on our way out of town, we made quick stop at Midnight Sun Brewing's Loft Bar. I was interested in picking up a couple of their new "Chub" style beer glasses, as well as giving some of their newest brews a taste. My wife ordered a glass of their Autumnfest Lager, while I had a glass of Trickster, a Belgian-style Pumpkin Ale.

The Autumnfest is a classic Oktoberfest-style lager, with a nice clean taste that emphasizes a touch of malty sweetness. Spot-on for the style and quite appropriate to the season. Not sure if this one will show up in bottles or not, but if you're up in Anchorage, check it out on draft.

When I first tasted Trickster, I initially thought that they had given me glass of Panty Peeler by mistake. Then the differences started to kick in, with subtle, nuanced flavors of pumpkin, cardamom, nutmeg, and coriander. At 7%, Alcohol By Volume is down, compared to Panty Peeler, while bitterness is up slightly at 22 IBUs. It still has that great Belgian flavor we've all come to expect, and it will make a great accompaniment to your Halloween party.

Last, but hardly least, Midnight Sun has released another of their Crew Brews. This one is Rumbah, a doppelbock aged in used rum casks, and I drank a bottle last week. I've always liked doppelbocks as a style; their strong malt backbone, coupled with the high alcohol makes for an excellent dessert or after dinner beer. And while I'm not much of a rum drinker, I do use it in cooking fairly frequently, as I appreciate the strong, sweet flavors it tends to impart to dishes. Pair these two flavors together and you've got Rumbah, at 10% ABV and 30 IBUs. It's well-balanced and flavorful, with the rum notes and malty-sweetness playing well together. It's another wonderful creation from the the Brew Crew. Note: If you're looking for Crew Brews in the Central Peninsula, the only place I've seen them is at Country Liquors in Kenai. If you're down in Homer, try The Grog Shop.

That's about it for this week. Next week I'll be reporting on my latest homebrewing effort, an IPA made with Simcoe hops (because I couldn't find any Summit hops!) and what else is cooking on the local beer scene.